AMD’s bringing sexy back with their new lineup of Ryzen Threadripper processors, and the numbers don’t lie.

It’s been many years since there was any significant shakeup in the CPU game. A severe lack of innovation from both Red and Blue teams had caused somewhat of a stalemate in the market, with Intel pushing slight design changes with each new Core series, and AMD sticking with the “add more cores” approach to an aging chip architecture. In 2017, AMD’s looking to change that with the upcoming August 10th release of their Ryzen Threadripper processor lineup and finally bring back the fury.

So, let’s get some specifications out of the way first. Ryzen Threadripper will be coming in two distinct flavours, the 1950X and the 1920X. The 1950X is a monster of a CPU, boasting 16 cores with simultaneous multi-threading (or SMT) for 32 threads of power, with a base clock of 3.4GHz and boosting to 4GHz. The 1920X is the little brother of the two, but it’s not out of the race with 12 cores, 24 SMT threads, a slightly higher base clock of 3.5GHz and boosting to 4GHz.

Both chips have a whopping 64 PCI-E lanes and will run on the brand new X399 platform with a physically imposing LGA-based TR4 socket which, while incompatible with the current Ryzen 7, Ryzen 5 and Ryzen 3 lineups, gives some wiggle room for AMD to pull out all stops and create something even more mind-blowing than this. Oh, and did I mention that it will be able to support 1TB of quad-channel DDR4 RAM? Yes, you read that right. One. Terabyte. Of RAM. 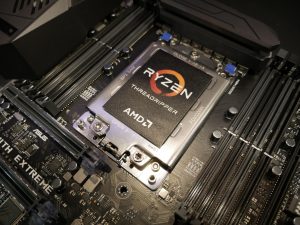 The huge TR4 socket that the Threadripper lives in. It probably has it’s own gravity well.

Of course, with innovation comes some downsides. Both Ryzen Threadripper chips have a 180 watt TDP, so a liquid cooling system is an absolute must, even at stock speeds (unless you want fried silicon for breakfast). Single-core performance will also potentially suffer when compared to Intel’s competing Core i9 lineup, something AMD has struggled with in recent years.

We won’t know the full extent of the potential problems and issues until we get our hands on one to test, but AMD have done their part, pitting their Ryzen Threadripper 1920X 12-core against a 10-core Intel Core i9-7900X in a synthetic Cinebench benchmark, with AMD knocking Intel in the gut with scores of 2,431 and 2,180 respectively. The real kicker, though, comes from the Ryzen Threadripper 1950X 16-core with a highly impressive score of 3,062. While we don’t know the details about the configurations of the bench test machines we can be pretty certain that these are real numbers and comparable to what we would actually expect from the chips in an unbiased system. 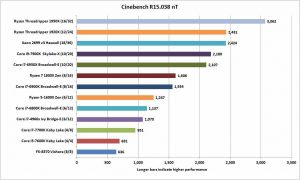 A side note on core count: it only really matters if you’re doing something that’s optimized for multiple threads and cores, like intense workstation workloads, heavy-duty multitasking or calculating the meaning of life. If your main activity on your computer is playing the latest AAA titles, don’t expect a massive performance increase. But, if you want to play games while rendering Pixar-quality 3D animations, audio and video editing projects at the same time, this might be one of the most cost-effective ways to do it.

Regardless of the potential caveats, this release is nothing but good news for the tech industry, because the giants have come back out to play, which only benefits consumers. Team Red had grabbed Team Blue by the hair earlier this year with the launch of the Zen architecture as a whole, and by the looks of things, it’s not going to be letting go anytime soon.